What Can Cause Painful Flossing?

While flossing, you should not feel any tooth pain. But, if the toothache appears, you need to find out why this happens. There are several reasons for that. One of a possible cause of tooth pain during or after flossing is that you are not using the proper flossing technique. If you are just learning how to floss your teeth, it is normal to have some difficulties at first. Just make sure not to push the floss aggressively in between your teeth, because you can seriously hurt your gums. Over time, you will learn how to gently remove all the food from your teeth gaps. But even if you don’t become confident with use of dental floss, do not worry. You can start using some of the best rated Waterpik water flossers you can buy as a great final solution. Waterpik efficiently cleans 99% of the food debris by using a stream of water which will not cause damage to your teeth or gums.

The second reason might be that you already have gum disease. It is caused by dental plaque and tartar pickup below the gum line.  Your tooth also may hurt while flossing if you already have developed the tooth decay and by moving the floss across that surface of the tooth you irritate already exposed nerve endings. Nevertheless which reason causes toothache while flossing, the most important is that you do not stop to clean in between your teeth. Failure to do so may make your oral condition even worse.

Why Do Your Gums Bleed When You Floss? Should You Stop Flossing? Use Satin Gentle Floss If Your Teeth Hurt While Flossing

Not at all. Bleeding gums is quite common when you just begin to clean your teeth with the dental floss. It is probably a place where a stronger accumulation of plaque has occurred that caused the inflammation. It may also be a sign that you suffer from some type of gum disease. This also doesn’t mean that you need to “save” this place, but rather – you need to clean it better. After a few days of cleansing, bleeding should stop because your gums become healthier. If even after a few days of flossing the bleeding has not diminished or disappeared, contact your dentist.

What To Do If Dental Floss Is Stuck Between Your Teeth?

If the dental floss gets caught between your teeth, probably the reason is very tight space between your teeth, an old filling or a crown that extends beyond the surface of a tooth, a cavity or tartar buildup on the tooth surface. Given that this place shreds the floss, it means that at the same place food sticks more easily and makes it very suitable for the emergence of the cavity. If the floss gets shredded and stuck between the teeth, try to to get it out yourself by pulling it out with another peace of dental floss or using a thin toothpick. In any case, you should visit a dentist who will determine what exactly it is about.

Do Your Teeth Feel Loose After Flossing?

First to mention – don’t worry. They are not actually moving. It’s just an oral sensation after flossing that may occur if your flossing technique was a bit rough. So, try not to force the floss down in between your teeth. And some people may also have feeling that when they close their jaws after cleaning with dental string, the teeth just go back into their places. If you can’t move your teeth with your tongue or your fingers, that means your periodontal tissue that holds teeth in bone sockets is healthy. In the case of severe periodontal disease, due to the jaw bone loss, teeth become wiggly and loose. But, then the teeth are mobile all the time. And one is for sure – in the lack of proper and thorough brushing and flossing, your teeth will definitely start moving around.

How To Floss Your Teeth? – Proper Flossing Technique

Why Should We Use An Interdental Brush?

The 5 Most Common Dental Problems

How To Use Dental Floss Properly 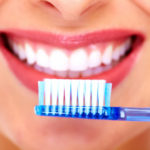 Should You Use A Waterpik Before Or After Brushing Teeth?

8 Dental Care Tips During the Winter to Avoid Teeth Pain